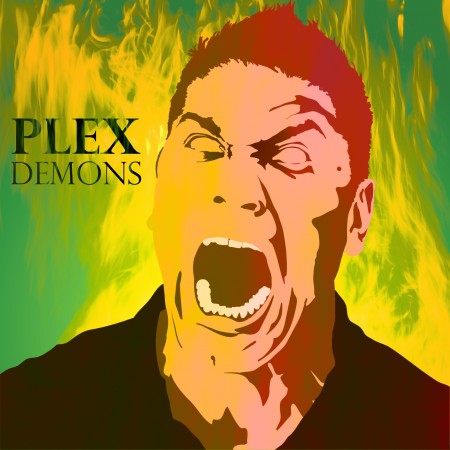 “Plex’s sophomore solo album is a great deal more polished than previous album Brainstorm. The production is primarily crisp, clean and radio-ready, while Plex’s traditional rap delivery is slow and deliberate, so his lyrics about struggle and overcoming adversity are easy to decipher. Demons starts strong with the title track, as catchy steel guitar and banging drums combine to create an up-tempo blues track about defeating demons, both inner and outer. It’s a good choice to open the album and also title it after, but by no means is it downhill from there. “New Leaf” is a touching song about maturing and improving yourself over a mellow drum and acoustic guitar combo that’s well-suited to the introspective lyrics, while first single and sad break-up song “I Can’t Breathe” maintains a bit of humour via its witty wordplay. “P.L.E.X.” is a fun, cartoony braggadocio battle track and bonus number “Hotel Bilderberg” is a conspiracy theory-laced collaboration with Touch that has been floating around the ‘net for a little while, the muddy, underground beat produced by 9th Uno. Demons also features Rich Kidd on production and vocal appearances from D-Sisive, B. Brown, Fatty Jones, Rellik and Sarah Podemski. If there’s any justice, the honest and accessible Demons should expose Plex to a wider audience.” – Thomas Quinlan

Demons is the second album by rapper Plex. Emerged from the First Nations, it incorporates just about everything that the music of the American continent has to offer to offer us a rap album of original, diverse and, above all, very good.

The de-de-demons in the head?

With a successful mix of hip-hop, R’n B, of acoustic blues and pop which is not without reminding Everlast (and even Beck on Demons), Plex addressed, often with humor, serious themes, related as much to his personal life to his side more politicized. Among his favored topics, the rights of First Nations and the insane. It also refers to conspiracy theories – such as those about the Illuminatis and the Bilderberg Group.

Even if Plex is well surrounded, with collaborators such as D-Sisive, its flow and his writing are the stars in the disk. The part I’m ready is worthy of a success of the quenching of Runnin’ ,” of Pharcyde or Back in the day of Ahmed. Step into the ring and P. L. E. X. enhances the pace – a reference to Jay-Z is even incorporated in the first.

The opening and titular track of “Demons” left me puzzled for about 30 seconds. “Somebody made a mistake,” said me to myself and I. “Either the record label sent me the wrong album, or I somehow used the wrong download link. This can’t be right – it sounds like bluegrass country rock.”

A quick scan of the album’s tracks showed that neither the label nor I were mistaken. Well known Canadian hip-hop artists like D-Sisive (“Another Day”), Fatty Jones (“Ready”) and Rellik (“Step Into the Ring”) appear throughout the credits. “Demons” is definitely the right album, although that just goes to show Plex is a little bit different from the average. A 15 year veteran who owns and operates his own independent label (New Leak Entertainment), he like fellow Toronto native Drake has made successful forays into acting and also has hosted an acclaimed radio broadcast called “The Plex Show” for over 2 years. Of course those are just the credentials in his bio – the music is what matters the most.

“Yo the mutt’s off the leash, the big red beast
just filled up the tank of his ’81 Caprice
And he out lookin for trouble if it don’t find him first
Just hope he get laid by the end of the verse
Not end up in a hearse, it’s the Beverly Crest
The last place you wanna go when you head out West
It’s, riddled with crime, heads nickels and dime
The women have boyfriends and they all did time
He knows the deal, but that don’t phase him
His girl left and he need a replacement
The man’s horny and he ain’t that patient
Looks for someone to take to his mom’s basement
There she goes, she’s custom made
She ain’t pretty, she just look that way
But at the end of the day she ain’t lookin to stay
She does this for a living and she wanna get paid”

The title track quoted above (which also features a cameo by B. Brown) proves Plex is a capable storyteller. He also self-produces, a familiar trademark of rappers who have a Northern Touch to their craft. When he does turn the reigns over to others, they turn in some impressive tracks. Rich Kidd’s work on “Warriors” is reminiscent of DJ Premier – bubbling, symphonic and lush. Speaking of deejays, DJ Corbett’s pop sensibility on “Ready” make his beat an ideal backdrop for a song by Tyga or Weezy. Shame produces “The Same” featuring Leemai and the track grows on me with each listen. You pick up a different layer of the production each time – percussion, synth, piano, and so on – it’s deceptively dense. And if you’re looking for a hard hitting track to train for a MMA fight, Da Reason has what you need on “Step Into the Ring” featuring Rellik.

With so many things going right for Plex on “Demons” it’s tempting to not nitpick, but with so many albums at retail or download these days it’s more necessary now than ever. Plex is capable of writing and telling a good story, but his voice is not among the most compelling when it comes to delivering it. One gets the feeling he’s constantly constipated on the mic, trying really hard to get shit out, and that it must be a huge relief when that verse finally drops. The guest rappers like D-Sisive on “Another Day” only highlight the problem, because they have such a relaxed and untroubled vocal flow when dropping their rhymes. It’s not that Plex doesn’t speak on the issues that bother true rap heads (“Wonder how the fuck Diddy ever outsold Kane?”) it’s just that he’s so serious it makes you wonder why he doesn’t stick to producing instead. He can’t help but overdeliver every syllable.

In the grand scheme I can’t say that “Demons” is a bad album. In fact this is an album I’d be happy to listen to again a day, a week, or a year from now. What troubles me in the end is that I’d probably feel the exact same way about this album whether Plex rapped on it or not. All that effort he puts into having a good flow just prevents his personality from connecting with the audience. He can tell you that he’s happy, sad, frustrated or mad – but you can’t hear it in his voice. You can be too passionate when rapping to the point the flow gets lost in a torrent of emotions (some artists like M.O.P get away with it though by being so much fun to listen to) but it would be better for Plex to have too many than not enough. It’s an irony to say it but “Demons” is a good effort hurt solely by Plex trying too hard.” – Steve ‘Flash’ Juon

“On 2009’s Brainstorm, Edmonton-born, Toronto-based Plex proved that there are still completely unique perspectives in hip hop; in his case by infusing his rhymes with personal stories about being an Aboriginal kid from the projects. On Demons, he ups the quality of the production and delivers witty and inquisitive lyrics. The Delta blues-style standout title-track (featuring B. Brown) is a revealing tale about facing and overcoming one’s demons. Stream it over on the URBNET’s Bandcamp.

In addition to his hip hop work; Plex is heavily involved in the Aboriginal community with him hosting music workshops and discussing his past struggles with addiction.” –Noah Siegel